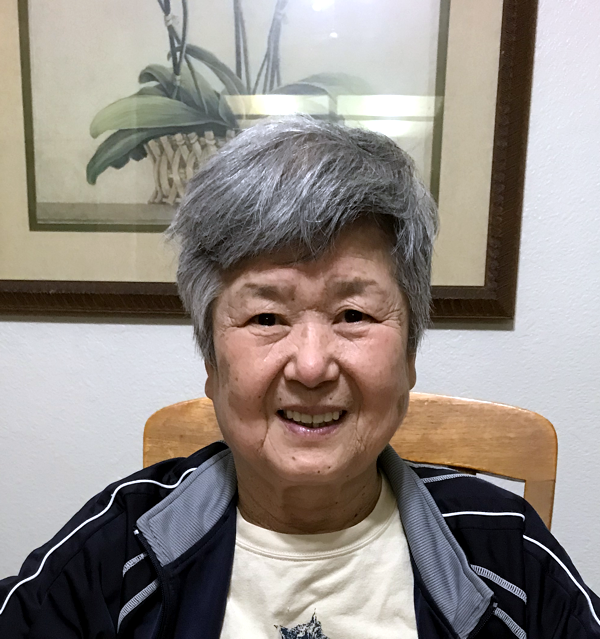 Dr. Kuniko Takeuchi was born in Tokyo, Japan. She grew up in the small town of, Chiba Ken, Japan. When she was the age of 14, her desire was to practice kendo. Fortunately for us, her town (Sakura) did not have a kendo dojo, but they did have judo. She began to attend judo classes and really liked it. She always liked more physical activities, being the 2nd highest student in her class while growing up and judo expanded her ability to move athletically.

Why is Sensei so passionate about judo? In the beginning as a little girl, she had very good and strong instructors. They had developed excellent assistant instructors whose movements were very fluid. Her discovery learning began while doing rondori with instructors who never used strength, but always used the movement, their movement, and her movement, to execute techniques.

In 1955 Kuniko began at the Kodokan at the age of 16. She was beating the other boys and girls so easily at her dojo, her sempai invited her to come with her to the Kodokan.

The dojo was full of women working hard at their judo. Sensei recalls the shodan’s and nidan’s were no problem; however, there was a very memorable sandan. A large part of the remainder of her Kodokan experience was motivated by the desire to improve her judo techniques from 1962 to 1968 and to one day defeat that sandan.

With Kuniko’s execution and work against that women, the Kodokan instructors recognized her very strong discipline and strong ukemi. They quickly realized her Judo potential. With that, Takeuchi was given the opportunity to practice, learn, and work to perfect kata.

Through 1962–1968, she earned her shodan, nidan, and sandan as well as a position on the Kodokan faculty in the women’s section; and for 2 years she was an overall instructor.

With permission from a very understanding principal at Josai High School, Tokyo, Japan; Kuniko accepted an invitation to be a visiting instructor at the YMCA Judo Club, Specialist Teacher’s Institute in Kuala Lumpur, Malaysia (upon request from the head instructor while visiting the Kodokan) in 1964, and at Shinwa Kwai Judo Club in Grimsby, England in 1966.

Beginning in 1995 she has taught at the Okubo / APOA Judo Club, also in Sacramento, CA.

When asked how judo in the United States can improve, Sensei was quick to respond with increase the number of good judo instructors. With more instructors we can provide more facilities, additional leveling of instruction based on abilities. The instructors must have strong teaching methods as well as judo skill.

Why may judo be the chosen sport for children, parents and families? In general, students need to have good basic techniques and skills. With no physical education in the required K-12 curriculum, students generally need ways to develop their motor skills. We need to teach basic skills of movement.

Other Skills and Accreditation 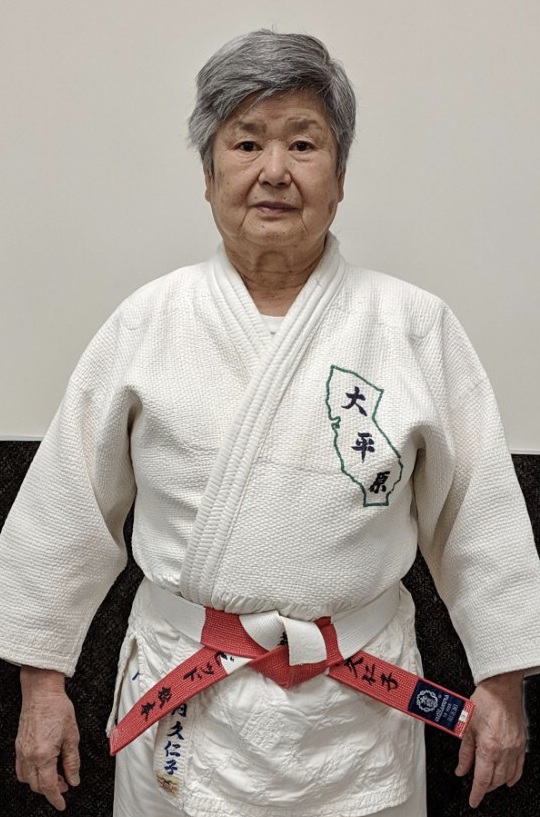 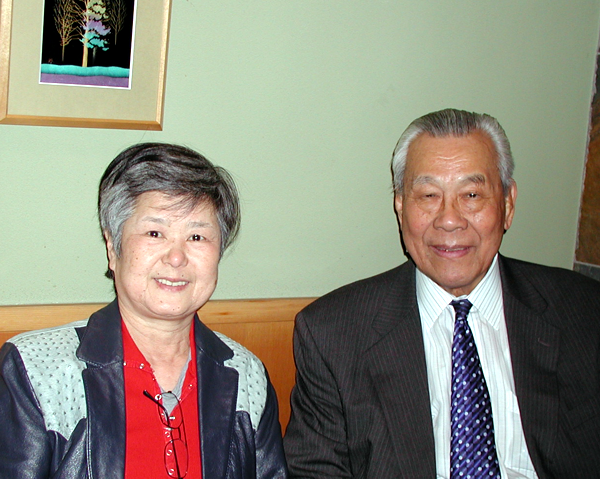 Kuniko is with Toshiro Daigo. Toshiro Daigo is the Chief instructor at Kodokan and former manager of the Japanese national team. He is one of three living Kodokan 10th dan. 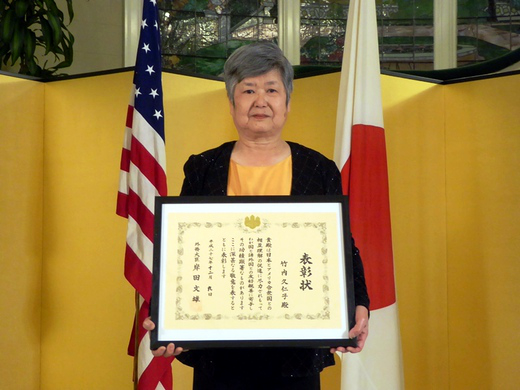 The Ministry of Foreign Affairs awarded her the Foreign Minister’s Commendation in honor of the 70th anniversary of the end of the war.

Order of the Rising Sun for Kuniko Takeuchi

Ms. Kuniko Takeuchi, who resides within the Consulate General of Japan in San Francisco’s jurisdiction will receive the Order of the Rising Sun, Silver Rays. Here is the letter of commendation, English and Japanese. 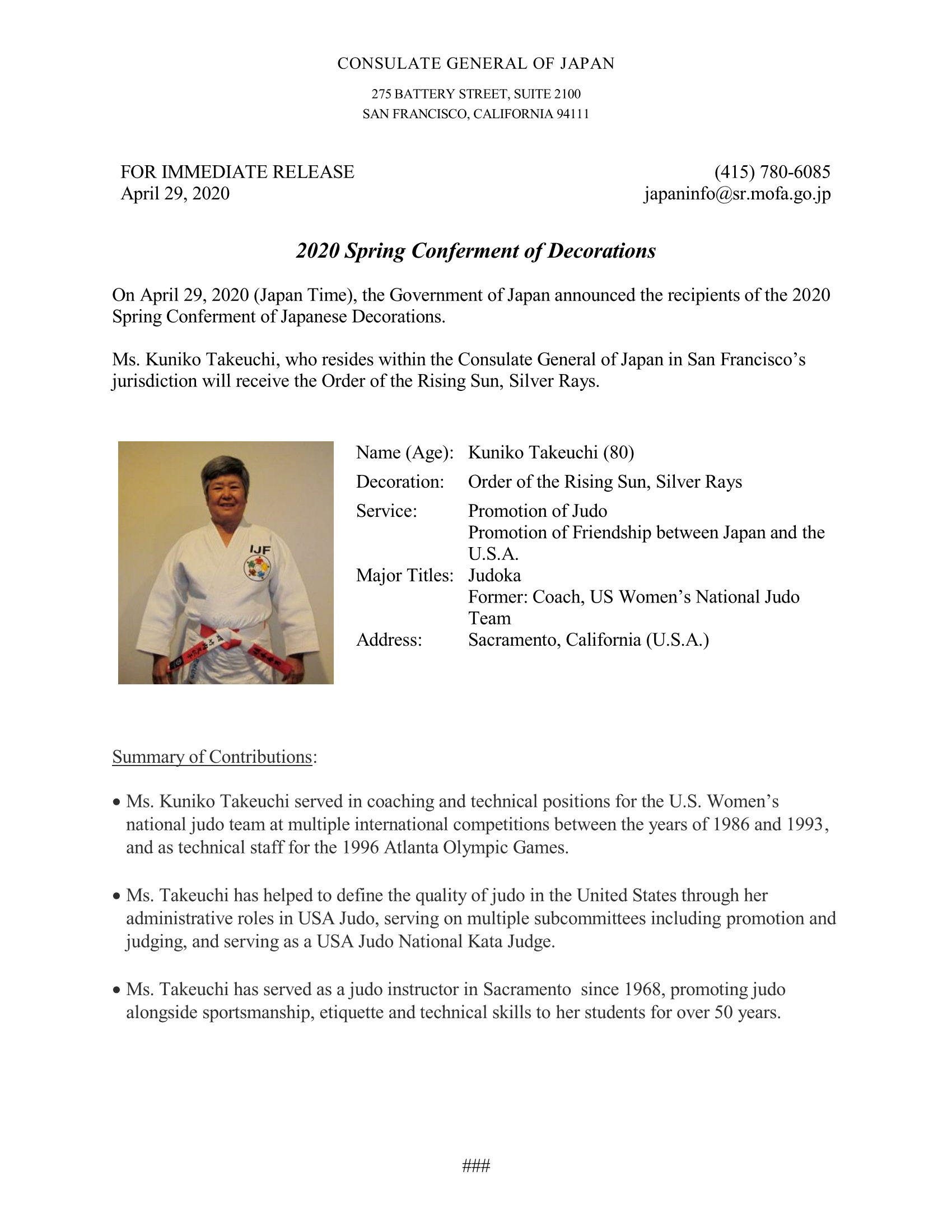 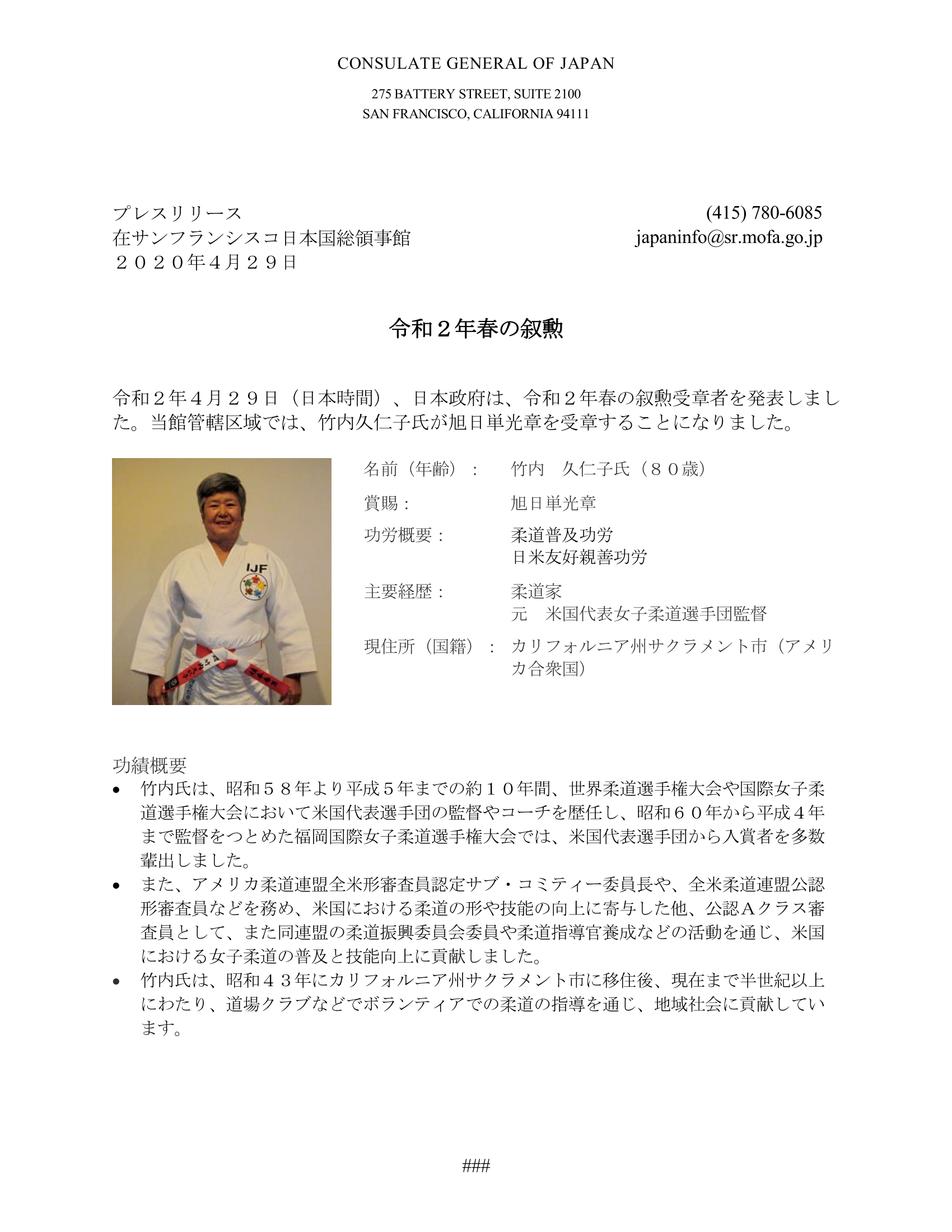