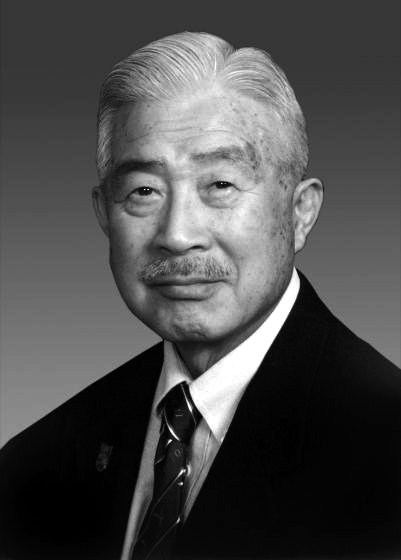 Ask Kim about his most satisfying achievement, however, and he’ll tell you it’s the way in which he oversaw more than 20,000 students as a coach and instructor at Michigan State and Lansing Community College.
“That’s my proudest accomplishment,” Kim said. “Many students and I shared personally, not only skills, but philosophy or education. That was just a fantastic, rewarding experience and made me never really tired of teaching.”

Kim began his journey in the sport when he was 14 years old, during the Korean War. He was immediately hooked when introduced to judo through his middle school athletics program and found he had the necessary skill set.
“A little success in the sport was immediate,” Kim said. “In judo, you throw each other. And I got to throw more than I was thrown, so I thought that was my sport.”

Kim earned a Bachelor’s degree in sociology in Korea before moving to the United States for graduate school at Goshen College in Indiana. He ultimately arrived in 1960 at MSU, where he would earn his Master’s in physical education.

His first day in East Lansing, Kim joined the school’s newly formed judo club. When it was determined he had the most experience, he became the club’s coach.

MSU began to offer judo as a three-credit course in 1964, with Kim naturally taking over as the instructor.
Three years later, he was recruited by LCC and taught judo, along with tae kwan do, on a part-time basis.
It was during that time he began an ambitious struggle to make judo a varsity sport at MSU. Athletic director Clarence “Biggie” Munn told Kim he would need a conference, so he recruited Indiana, Ohio State and Purdue to form his own judo league.

While he never succeeded in making judo a varsity sport, the MSU men’s team eventually won the Big Ten in 1969–70 and earned the respect of Munn. “Even though these are club sports, when we win, he loves winners,” Kim said. “Anybody who wins is his friend, so I had a good relationship with him.”

Kim continued his personal success when he first became an Olympic official in 1976.

In 1977 he became chair of the National Teacher Certification Committee. He included the PACE program at Michigan State for the voluntary coaches program. In 2000 he relinquished his chairmanship due to health issues.

In 1982 and 1984 he was elected as 1st Vice President of USJF. Kim’s teams also continued their success throughout the following decades, with MSU’s women capturing a National Collegiate Judo Championship in 1984.
He also was the chair of the USA Judo Referee Committee for two terms from1984 to 1988 and then again later for one more term.

He was also teaching as many as eight classes a term at MSU and LCC until he had to slow down due to health problems. Doctors discovered Kim’s main artery was completely blocked, requiring open-heart surgery in 2000.
“Recovery was very good,” Kim said. “I was back teaching class in a week or so (following surgery), and then I taught one more year after.”

While he remains involved with the MSU judo club in aspects such as fundraising, Kim is now retired. He has lived in Okemos for the past 30 years with his wife, Myra, whom he met through the judo club in 1962.
He’s also recently discovered love for a new sport – golf. Kim spends almost every day playing at Forest Akers, shooting 84 on a good day and competing in leagues.

Though he enjoys competition on the golf course, it’s easy to understand why he didn’t compete more in judo during his time at MSU.

“If I entered any tournament, I would be competing with my students,” Kim said. “That was not to my liking, 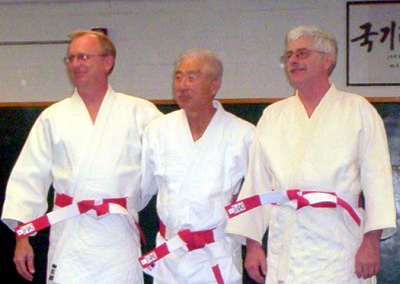 Mr. Don Flagg and Mr. Tom Sheehan were promoted to Rokudan (6th degree Black Belt) at the semi-annual meeting of the USJF Board of Examiners on October 17, 2007. On October 29th, Mr. Jongoon (Jay) Kim, 7th degree Black belt, made the ceremonial presentation of the red and white belts to Mr. Flagg and Mr. Sheehan.

Induction into Lansing hall of fame from 2010

Konan yudanshakai’s notice of this event

A short bio from the MSU judo club