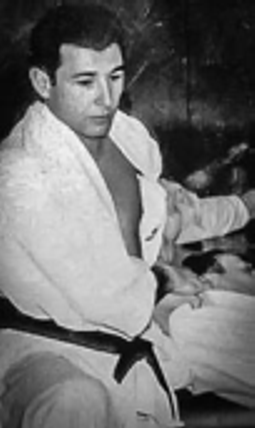 Ben Nighthorse Campbell (born April 13, 1933) is an American politician. He was a U.S. Senator from Colorado from 1993 until 2005. Campbell was a three-term U.S. Representative from 1987 to 1993, when he was sworn into office as a Senator following his election on November 3, 1992. Campbell also serves as one of forty-four members of the Council of Chiefs of the Northern Cheyenne Indian Tribe.

Campbell attended Placer High School, dropping out in 1951 to join the U.S. Air Force. He was stationed in Korea during the Korean War as an air policeman; he left the Air Force in 1953 with the rank of Airman Second Class, as well as the Korean Service Medal and the Air Medal. While in the Air Force, Campbell obtained his GED and, following his discharge, used his G.I. Bill to attend San Jose State University, where he graduated in 1957 with a Bachelor of Arts in Physical Education and Fine Arts.

He is listed as Ben M. Campbell in his college records and records of his Olympic competition, but was given the name “Nighthorse” when he returned to the Northern Cheyenne reservation for his name-giving ceremony, as a member of his father’s family, Blackhorse.

While in college, Ben was a member of the San Jose State judo team, coached by future USA Olympic coach Yosh Uchida. While training for the Olympic Games, Campbell attended Meiji University in Tokyo, Japan as a special research student from 1960-1964. The Meiji team was world renowned and Campbell credited the preparation and discipline taught at Meiji for his 1961, 1962, and 1963 U.S. National titles and his gold medal in the 1963 Pan-American Games. In 1964, Campbell competed in judo at the 1964 Summer Olympics in Tokyo. He suffered an injury and did not win a medal.

In the years after returning from the Olympic Games, Campbell worked as a deputy sheriff in Sacramento County, California, coached the U.S. National Judo Team, operated his own dojo in Sacramento, and taught high school (physical education and art classes). He and his wife also raised quarterhorses, including a Supreme Champion and AQHA Champion, “Sailors Night”. They bought a ranch near Ignacio, Colorado on the Southern Ute reservation in 1978.