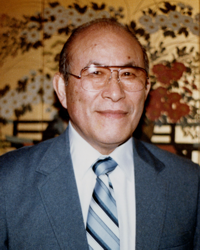 Mitsuho Kimura was born in San Francisco in 1916. He was oldest of 8 children. About 1931, the family moved to the San Gabriel valley, in Southern California, and a few years later, Kimura graduated from El Monte High School, where he wrestled on the varsity team.

He started judo at the San Gabriel Judo dojo in 1931, at age 15 (e.g., upon moving to San Gabriel). By 1934, he was 1-kyu. He received 1-dan in 1935, and by spring 1936, when he was co-captain of the Nanka team that met Seattle in LA, he was 2-dan. During this tournament, Kimura got a tie with Ken Kuniyuki. Kimura was promoted 3-dan as a result of this tournament. Jigoro Kano was present, so this is a Kano promotion.

In 1938, Kimura joined the Hollywood dojo.

In 1939, Kimura attended a seminar with Sumiyuki Kotani, then visiting LA. He got his 4-dan around this time.

During WWII, the Kimura family was interned at Santa Anita and Tule Lake. Kimura established judo clubs at both camps. His assistants included Hank Ogawa, formerly of Bainbridge Island and eventually of Ore-Ida.

Kimura was elected president of Hokka Yudanshakai in 1954. In 1955, he was elected to the board of Judo Black Belt Federation. In 1956, he participated in the first World Championships in Tokyo.