While stepping forward with his right foot, Uke attempts to grasp Tori in Migi-shizen-tai. Tori seizes this opportunity, grasps Uke in Migishizen-tai and pulls Uke to attempt to break the balance forward while taking one step backward by Tsugi-ashi from his left foot. Responding to Tori’s pull, Uke takes one step forward by Tsugi-ashi from his right foot so as to try to protect his stability (Photo 2).

While taking again one step backward by Tsugi-ashi from his left foot, Tori grasps Uke ’s right middle-inner sleeve with his left hand facing four fingers upward by bringing it through under Uke ’s right elbow and pulls Uke to attempt to break the balance forward (Photos 3- ①② ). Responding to Tori’s pull, Uke takes one step forward by Tsugi-ashi from his right foot so as to try to protect his stability.

Tori takes one wide stride backward with his left foot while making Uke to move his right foot forward to break Uke ’s balance forward by pulling his left hand. Tori lowers his hip to be in the posture of Jigotai, puts the right side of his neck to the right side of Uke’s hip when Uke ’s balance is broken forward and inserts his right hand shallowly into the inner side of Uke ’s right thigh to hold it (Photos 4- ① ② ③ ). Then Tori lifts Uke onto his shoulders in one quick motion while pulling his left elbow down strongly toward the left side of his hip and being the posture of Shizen-hontai by moving his left foot near to his right foot (Photos 5, 6- ①② ) and throws Uke to the direction of his left front corner (Photos 7, 8).

When left “Kata-guruma ” is finished, both return to their initial positions, turn around their bodies to move forward each other quietly and begin Koshi-waza . 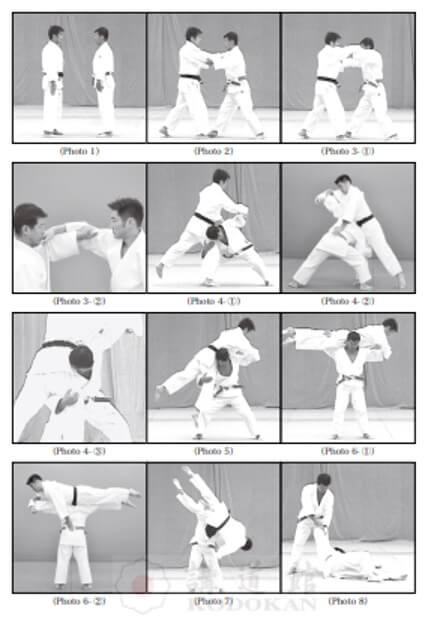