While stepping forward with his right foot, Uke attempts to grasp Tori in Migi-shizen-tai. Tori seizes this opportunity, grasps Uke in Migishizen-tai and pulls Uke to attempt to break the balance forward while taking one step backward by Tsugi-ashi from his left foot and grasping Uke ’s rear collar with his right hand (Photos 2- ① ② ). Responding to Tori’s pull, Uke takes one step forward by Tsugi-ashi from his right foot so as to try to protect his stability.

Tori retreats slightly his left foot to pull Uke forward (Photo 3) and pulls/lifts Uke ’s body upward/forward by using his right hand effectively while moving his right foot toward the front and inner side of Uke ’s right foot being advanced (Photo 4). Responding Tori, Uke moves his left foot forward to be in Shizen-hontai and tries to protect his stability. At the moment, Tori moves around his left foot toward the front and inner side of Uke ’s left foot while pulling/lifting Uke straight forward (Photo 5), lowers his hips, put the back side of them against the front side of Uke ’s thighs (Photos 6- ①②③ ) and throws Uke directly in front of him by pulling down both of his hands while stretching both of his knees in one quick motion and pushing up his hips (Photo 7, 8).

Tori stands on the right side toward Shomen and Uke rises to stand on the left side toward Shomen facing Tori in the proper distance. Then, both Tori and Uke grasp in Hidari-shizen-tai to perform left “Tsurikomi-goshi ” in the same manner as before.

When left “Tsurikomi-goshi ” is finished, both return to their initial positions, turn around their bodies to move forward each other quietly and begin Ashi-waza. 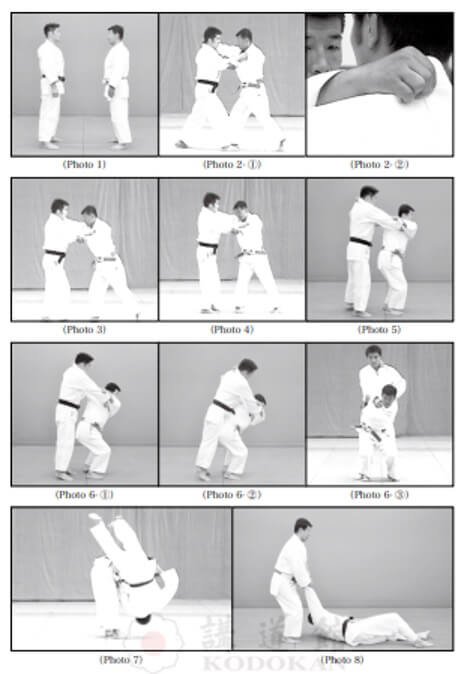