While stepping forward with his right foot, Uke attempts to grasp Tori in Migi-shizen-tai. Tori seizes this opportunity, grasps Uke in Migishizen-tai and pulls Uke to attempt to break the balance forward while taking one step backward by Tsugi-ashi from his left foot. Responding to Tori’s pull, Uke takes one step forward by Tsugi-ashi from his right foot so as to try to protect his stability (Photo 2).

Tori moves around his left foot backward to diagonally right side behind his right foot while pulling Uke with both of his hands and making Uke to move his right foot slightly forward to break Uke ’s balance diagonally forward to the right (Photo 4). Tori sticks his right hip firmly against Uke ’s abdomen (Photo 5) and throws Uke by sweeping up as sliding his right leg along Uke ’s right leg (Photos 6, 7- ①② , 8, 9, 10).

Tori stands on the right side toward Shomen. Uke rises to stand on the left side toward Shomen facing Tori in the proper distance. Then both Tori and Uke grasp in Hidari-shizen-tai to perform left “Harai-goshi ” in the same manner as before. 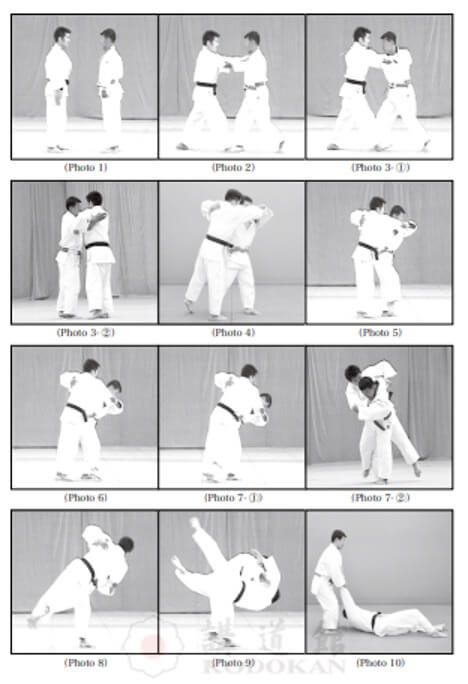