How to Score a Judo Contest

HOw to score a Judo Match

How to Score a Judo Contest 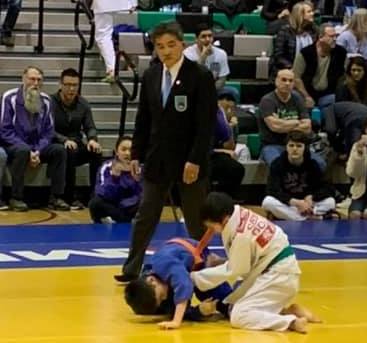 At the end of a match, the competitors will adjust their judogi and face one another. Once the referee indicates the winner, the two competitors will bow to each other before leaving the mat.

There are three different types of scores in judo, listed below in order from highest-scoring to lowest-scoring.

A full throw in which a contestant throws his opponent to the mat with “considerable force and speed” so the opponent lands “largely on his back.” An ippon is also awarded when a contestant immobilizes his opponent with a grappling hold-down for 20 seconds, or when an opponent gives up or passes out. An ippon immediately ends the match. Equivalent to a knockout in boxing or a pin in wrestling.  Referee’s hand signal: arm straight up. 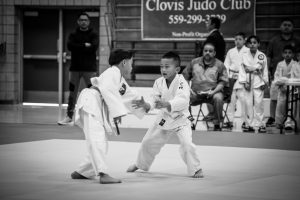 A throw which shows power and superiority but isn’t clear enough to be an ippon, either because the opponent didn’t land “largely on his back” or because the throw lacked speed or force. Waza-ari is also awarded for immobilizing an opponent for 15 seconds or more, but less than 20 seconds. Earning two waza-aris in a match is equivalent to an ippon and will immediately end the match. Referee’s hand signal: arm out at shoulder level from the side.

There are two levels of penalties in judo, listed below from most severe to least severe.

Grave infringement. Calls for immediate disqualification of the offending judoka. Can be assessed for fouls such as intentionally trying to injure the opponent, unsportsmanlike conduct or for repeated violations of the rules. The negative equivalent of an ippon.

Slight infringement. Assessed for any rules violation that does not merit immediate disqualification. Some examples are: non-combativity (player does not attack enough), intentionally stepping out of bounds, playing too defensively, putting a hand directly on the opponent’s face. The first two shidos are warnings. If a competitor receives a third shido in one match, those shidos become a hansoku-make, which immediately ends the match.

The following are ways a match could end before time expires.

If the point totals and number of penalties are the same, then a winner is decided by “golden score,” which is essentially sudden-death overtime. The clocks are reset, and the first person to score is the winner. A player can also win if the opponent is given a shido during the golden score period. There is no time limit.

If the point totals and number of penalties are the same, then a winner is decided by “golden score,” which is essentially sudden-death overtime. The clocks are reset, and the first person to score is the winner. A player can also win if the opponent is given a shido during the golden score period. There is no time limit.

Ending a match by ippon

The following are the four ways that a judoka can score an ippon.

A competitor can give up by “tapping out.” During a tapout, the surrendering judoka taps their arm, mat, self, or opponent repeatedly to ask him to release the technique. The surrendering judoka can also say “maitta” (I give up). Tapouts most commonly occur when a judoka is being choked and in danger of passing out, or when a judoka is in an armbar and in danger of having their elbow dislocated.

Once a judoka taps out, the match is over, and their opponent wins by ippon.