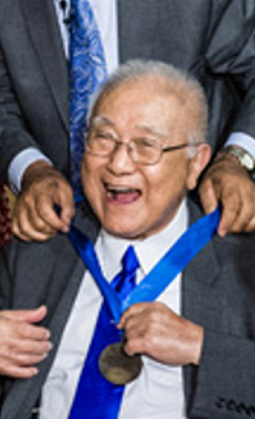 Yoshihiro “Yosh” Uchida (born April 1, 1920) is an American businessman, entrepreneur, and educator who is best known for his contributions to judo. Uchida has been the head judo coach at San Jose State University for over 60 years, and has played a leading part in the development of the university’s judo program.

Uchida is the child of Japanese immigrants who worked as farm laborers in California’s Imperial Valley. Yosh studied biology at San Jose State, and in 1940 was made the student-coach of the Physical Education Department’s judo program. During World War II, while members of his family were sent to internment camps, Uchida was drafted into the United States Army during World War II and served as a medical technician. He returned to San Jose State in 1946 to complete his degree and to restart the judo program.

After graduating in 1947, Uchida remained the coach at SJSU, a part-time position, while working as a laboratory technician at O’Connor Hospital and then at San Jose Hospital, before buying and operating a medical laboratory in 1956. During this time, Uchida and University of California, Berkeley judo coach Henry Stone began developing rules to allow their students to compete against each other, including a weight class system, moving judo away from a martial art for self defense to a sport for competition. Stone and Uchida persuaded the Amateur Athletic Union (AAU) to sanction judo in 1953; the first AAU National Championship in judo was held at San Jose State in that year.

Uchida was elected president of the Judo Black Belt Federation for 1960–1961. As president, Uchida represented the United States at the International Judo Federation meeting in Paris in 1961. At that meeting, the IJF voted to include the weight class system for all future international judo competitions.

In 1962, Uchida organized the first National Collegiate Judo Championship, which was held at the United States Air Force Academy.[citation needed] Uchida’s San Jose State Spartans won the first of their over 40 national championships under his leadership at the inaugural tournament.

Uchida represented the United States as the team coach of the first Olympic Judo Tournament at the 1964 Summer Olympics in Tokyo. The team included two of Uchida’s students from San Jose State, Ben Nighthorse Campbell and Paul Maruyama. James Bregman won a bronze medal in the under-80 kg class, becoming the first American to medal in the sport.

He used the funds from the sale of his laboratory business to found Uchida Enterprises, which is involved in real estate redevelopment in San Jose’s Japantown neighborhood.

For his contributions to judo, Uchida was awarded the Order of the Sacred Treasure with Golden Rays in 1986 by Emperor Hirohito of Japan. He was inducted into the San Jose Sports Hall of Fame in 1996. Uchida has also received many awards from San Jose State, including the university’s highest award (the Tower Award) in 1992 and an honorary Doctorate of Humane Letters in 2004. Additionally, the building on campus that houses the judo dojo was renamed “Yoshihiro Uchida Hall” in 1997. Coincidentally, Uchida’s parents and brothers were processed in this building prior to being sent to an internment camp during World War II.