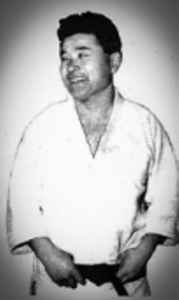 Don “Moon” Kikuchi was the head instructor of the San Jose Buddhist Judo Club for 40 years, a position he assumed in 1952, five years after the club’s inception when founder Yoshihiro Uchida, now Head Coach at SJSU, left to concentrate on his San Jose State coaching. One of the original members of the San Jose Buddhist Judo Club, Mr. Mits Endo, had heard that Don moved to San Jose and recruited him to train at the Club. The Club was originally located in a galvanized structure, where the parking lot next to the Annex is.

“He was very gentle with his students,” Uchida said, “but he got his point across, and his classes were well disciplined.”

He had attained a seventh-degree black belt in 1988. He won the First National Amateur Athletic Union’s (A.A.U.) 180-pound Championship in 1953, held in San Jose.

Don was chairman of the Board of Examiners for the United States Judo Federation and also president of California Judo Inc. as well as Central Coast Judo Association in 1992, when he passed away due to a heart attack at the age of 68 years.

Don was born in Santa Maria, CA in 1924. He started Judo at age 10 in Guadalupe, CA. He had just completed high school when World War II broke out. He was sent to an internment camp in the interior West. He continued to practice Judo. After he was released from the Gila River Camp 2 in Arizona, his working career took him to Cleveland, New York, Santa Maria, Stockton, and finally to San Jose in 1948.

He and his brothers, Joe and George, opened Cambrian Nursery in San Jose. Don concentrated on the landscaping division of the business. They successfully grew their business to include two nurseries and a hardware store and employed more than 75 people at the height of its growth. They sold the business in 1989.

Don Kikuchi and his wife, Sachiko, had married in 1950 and had a son, Danny, and a daughter Lorraine. He had two grand-daughters, Jenelle and Stephanie Kitasoe.

He became great friends with another Judo Instructor, Mr. Tamo Kitaura, from the Palo Alto Judo Club. They taught Judo together and enjoyed fishing and golfing together too.

“Not only was he (Don) an outstanding Judo player,” said Uchida, “but he was respected by everyone who came in contact with him.”

A great legacy of Sensei Don “Moon” Kikuchi is his son, Sensei Danny Kikuchi, currently a head instructor and making great contributions in the lives of the students of the the San Jose Buddhist Judo Club today.

Don did not take up the game of Golf until later in his life. He learned the game in short time and really caught the “fever”. The SJBJC started the Club Golf Tournament. It was held twice a year in the beginning. Don really enjoyed the game and this Tournament.

In 1988 the Club and Judo Community held a testimonial dinner in his honor. At that time the Kikuchi Scholarship was started.