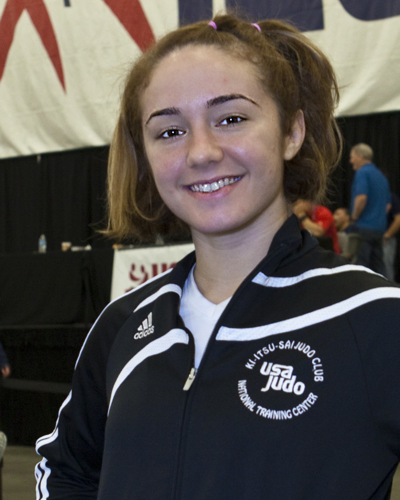 When she was nine years old, Angelica Delgado began learning judo under the guidance of her father, Miguel Delgado, a former Cuban judo Olympian. It was a great start, because sixteen years later, she has qualified for the United States Olympic Judo team, and will be traveling to Rio De Janeiro, Brazil for the 2016 Summer Olympic Games. This is particularly impressive because the participants in the Olympic Judo competition are chosen not by their home countries, but by the International Judo Federation on the basis of their international competitive ranking. Delgado is currently ranked 25th in the world in the women’s 52 kg class.

The USJF’s Roving Reporter caught up with Angie this spring at the 2016 US National Championships in Irving, Texas, where she won her fourth national title. A long-time prominent women’s competitor nationally and internationally, Delgado barely missed qualifying for the 2012 London Olympics. It was different this time …

RR: How have the last four years been different from the previous four years in your quest for the Olympics?

Delgado: Before 2012 I had no idea of the qualification process. I was still going to school, in high school and then in my first year in college and I just did it on my own. I would just go to judo practice at night five times a week.

But after 2012, I got a personal trainer, trained two to three times per day, six days per week. My training is a lot better – more judo-specific. I’ve gotten stronger, and have been able to control my weight better at 52 kg. I also see a sports psychologist three times per week, which helps me with hand-eye coordination, building up confidence in myself, and having a completely different mindset.

So I think I’ve been able to do a complete 180 on my game. I can tell that I’m stronger, faster, and a much better competitor.

RR: How does having qualified for the Olympic team affect your daily life and the way you train?

Delgado: I’ve been focusing on every day being better and better – being the best fighter I could possibly be. Day to day, it’s been about improvement, taking the little things that I wasn’t good at or felt uncomfortable with, such as fighting lefties and just improving every day, every single day. There was no time to relax. I’m not one of those people who could think, “Oh, I’m going to be on an Olympic team so now I’m done”. For me, if I don’t improve every day, if I don’t see a little bit of improvement on a day to day basis, it’s like dying a little bit inside. I need some kind of progress, some change in a good way, in a positive way, so for me it’s all about growth and getting better

RR: The Olympics is a huge part of your life and are coming up soon. How do you see that changing after the Olympics?

Delgado: I’m definitely going to go for another Olympic run, for 2020, because I’m so young – I’m 25. And I love judo. If I go for three days without putting on a gi, I feel weird. People ask me if I’m going to take a break afterward, and I say that I’ll probably take a little bit of a competitive break, but I’ll probably still go to practice. And I’ll still put on a gi, and I’ll go to school and finish my degree. I have one more semester – I’m doing a double major in psychology and health services administration (at Florida International University) – I’ll finish that up and be done in December. Then I’ll start fresh in January, competing again.

RR: When did you realize that judo was going to be something that you were going to do seriously at a high level?

RR: How have your senseis affected your development over the last few years?

Delgado: Jhonny Prado (head coach at Ki-Itsu–Sai, the USA Judo National Training Center in Coconut Creek, Florida) and German Velazco have been my senseis since I was twelve. They know me very well – I’m like their daughter and I train with them every day. I do the judo and tactical/technical with them, and in the mornings I do my physical preparation with my trainer, Jesus Gallo.