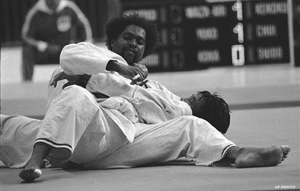 Allen James Coage (October 22, 1943 – March 6, 2007) was an American professional wrestler with the WWF, Stampede Wrestling and other promotions, better known by his ring names Bad News Allen and Bad News Brown. He won a bronze medal in heavyweight judo at the 1976 Summer Olympics. He remains the only American heavyweight judoka to have won an Olympic medal.

Allen initially trained with Joseph Fuccillo. Allen Coage was a US Grand Champion for Judo and received a full scholarship to the Kodokan with the help of Hank Kraft. Prior to his training as a wrestler, Coage trained in judo for the better part of two decades, under the direction of renowned instructor Yoshisada Yonezuka, and earned a spot on the United States Olympic team at the Games in Montreal. He even trained in Japan with judoka masters, living in near poverty and continuing on solely for the love of his sport. After his bronze medal victory, Coage attempted to open his own judo school. Later, he decided to try his hand at professional wrestling. He began training with Antonio Inoki around 1978.

Coage died of a heart attack at Rockyview General Hospital in Calgary, minutes after being rushed there due to chest pain.