Athlete Scholar of the Year

The committee received this letter of thanks from Tyler Shimizu.

I became a member of the Sacramento Judo Club in November 2008 when I was 13 years old. Since then I have gone throughout some major changes of my life. I went from the husky and lazy middle school student and transformed into a stronger and well-disciplined adult. I never thought as a child that I would be doing judo or any martial art right now because from the age of six my parents put me in a recreational soccer league in which I played for seven years. When I turned 13 I realized that I wasn’t interested in playing soccer again for the eighth year and wanted to try something else. Due to me being a little over weight and being picked on in middle school, my dad suggested I learn a martial art. My dad’s suggestion led me into the path of learning judo. My dad said that judo might be exactly what I was looking for and that my grandpa practiced in his childhood so I thought it might be interesting. He was right, judo was something completely different than playing soccer. Something about the sport of judo intrigued me and I wanted to attend practice to learn more and more. As time went on and I promoted in rank, my training became more intense, placing in the tournaments wasn’t as easy and I struggled. Even though I struggled I knew that if I was persistent and listened to my senseis I would improve and push my judo to an even higher level. Even now years later, as a black belt I am still pushing myself to the limit, learning new things, and applying them.

Judo has affected my life in a very positive way. From participated in many tournaments I have learned the life lessons of sportsmanship. I learned that it doesn’t matter whether you win or lose but the main goal is that you learned something. Judo taught me how to set goals and plan out how to achieve them. Judo gave me the mindset of responsibility, respect, and commitment. I also believe in the “maximum efficiency” and “mutual benefit” which shape my life to this day. Maximum efficiency means that when faced with a problem sometimes the solutions are the simplest. Sometimes it can be changing the problem instead of looking for the answer. For mutual benefit, I believe that as humans we should help and give back to those that helped us to better ourselves and others amongst us.

Overall throughout the six years I’ve been in judo so far, I have become stronger, more confident, disciplined, and perseverant. Judo has taught me to control my emotions, never give up, and to look at things in a different perspective. I’m glad and grateful that I started judo at such a great club where I have been supported from all my teammates and senseis. Also befriending and creating strong bonds with my fellow teammates and senseis that I won’t ever forget.

I am very grateful for receiving the Athlete Scholar of the Year award. This scholarship will help me pay for my college classes and books at Consumnes River College and at Sacramento City College until I can transfer to Sacramento State University. I am currently studying in the field of computer science and plan to continue pursuing that field at Sacramento State University once I complete all my transfer credits. I’d like to thank you again for giving out to the judoka like us to further ourselves in our future and educational goals. 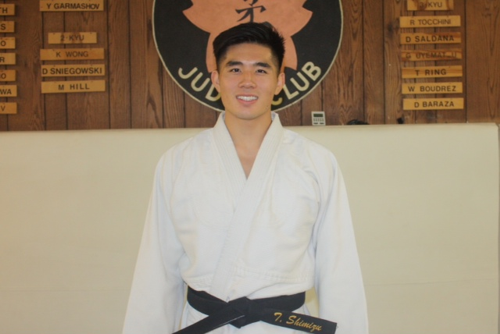