The 30th Judo World Championships is about to begin in Chelyabinsk, a city of 1.1 million people, WAY out here east of the Ural Mountains of Russia. The site of the 2012 European judo championships, Chelyabinsk (che-LYA-binsk) is called the “Gateway to Siberia”, though at this time of year the weather is mild, with temperatures from lows of 48 to a high of 72 degrees forecast for this week. So ditch those mental images of snow drifting around the USJF’s half-frozen Roving Reporter (RR) for now.

There are over a dozen universities in Chelyabinsk, and the city is one of the major industrial centers of Russia. And you might be interested to know that one of her sister cities is Columbia, South Carolina.

In the Moscow airport, I stumbled across half of the US team trying to catch some rest near the gate where we were to board the plane to Chelyabinsk. Marti Malloy, Nick Kossor, Brad Bolen, Angelica Delgado, Hannah Martin, and Leilani Akiyama were all sitting on the floor, leaning against the wall, looking pretty tired.

The plane trip from Moscow to Chelyabinsk is a two-hour ride, and was loaded with groups of (probably also very tired) judoka from around the world. Young men and women in sweats, judo logo jackets, and people that just looked very tough were reuniting with friends and opponents.

The holiday mood continued in the Chelyabinsk airport, with groups of supporters and teammates cheering as the travelers walked into the terminal. The organizers have told me that people have been arriving for days in preparation for this event. 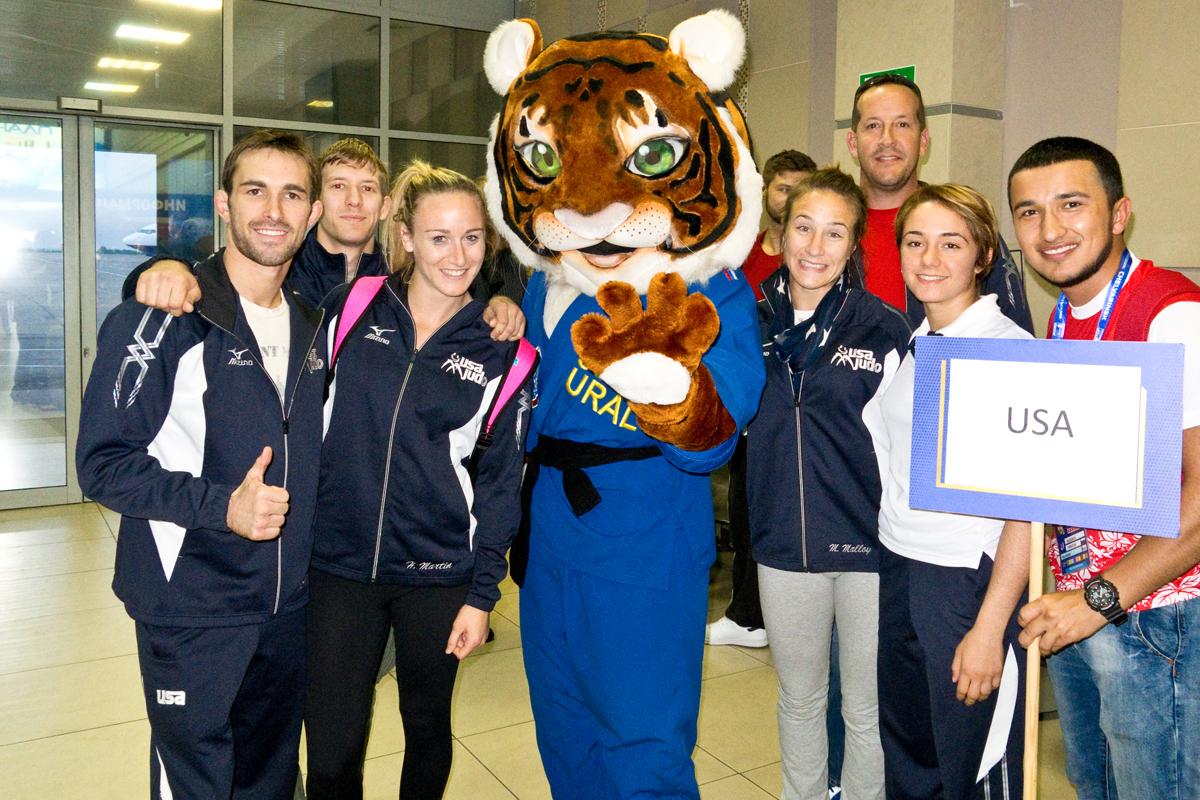 Part of the US team arrives at the Chelyabinsk airport: Kossor, Bolen, Martin, Greeting Tiger, Malloy, team physician Swirsky, Delgado, and another greeter.

The Traktor arena is on the edge of the city, and on the 25-minute ride there and back today I saw hundreds of signs advertising the Judo World Championships. They are like the old Volkswagen Bugs – you couldn’t look around without seeing at least one of them.

Even a day before the competition was scheduled to begin, the area around the arena was enveloped in activity, with event staff, police and other security, media, and scores of others going about their business to prepare the arena for the anticipated crowds of judokas and the fans.

One of the most interesting events, and which occurs on the day before the competition begins, is the official draw, held in a local hotel. Now you might think that there couldn’t be much to a computerized creation of competition pools. But the International Judo Federation (IJF) has successfully done what the National Football League (NFL) has done in the USA, in creating something really big, important, and a focus of coaches, fans, and the media, out of a near-nothing task. As the marketing equivalent of the NFL’s annual college draft, the IJF puts on a screen show with the highest professional level of visually and musically exciting videos of the top-ranked fighters just before the software does its job, with a dynamic visual display of each competitor’s name floating above a colorful pool sheet in the background as the names fall into place one by one. This display is repeated for each of the 16 categories for men and women, and is preceded and followed by greetings and reports to the assembled throng (admitted only with proper business attire) from the IJF luminaries. And just outside the meeting center there are drinks, a live band with a sultry singer this year, and newly-printed pool sheets for all. It is quite a show, and the US would do well to consider following the IJF’s lead on this to increase the excitement around the national tournaments and to draw sponsors who would likely be impressed with this level of professionalism.

So we’re about to begin the most important annual judo tournament in the known galaxy, and the IJF has done its job: Everybody here considers this event a really big deal. So stay tuned to this website for more updates from your RR. Judokas in the USA should know about the World Championships and the US team members so we can show a little sport fanaticism of our own!