Bolen Starts Well, but is Stopped in Second Round

Bradford Bolen, four-time USA World Team member at age 26, was about to start a fight, and he was feeling good about it. “I felt good – I slept decently, and in my first match, as soon as I put my hands on the guy (CHIEN, Chia Hung (TPE)) and just felt him, I was pretty confident I was going to win. I just knew that I couldn’t do anything stupid or try any kind of risky throws. Basically, after I felt what he had, and I knew his arsenal because I had watched a few videos on him, I knew what he was going to do, and I was pretty confident that he wouldn’t be able to throw me with it. 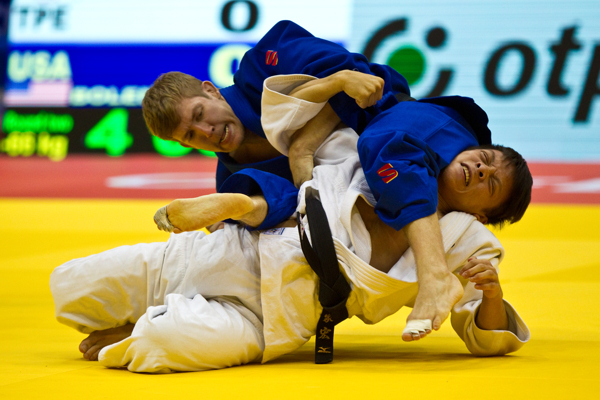 “Other than that, I was just staying in position, making sure not to get penalties myself, and taking as many shots on the ground as physically possible. I think I burned close to three minutes (of the five-minute match) of the clock just from doing newaza (matwork) and I was tiring the guy out by trying to choke him or armbar him. Yeah, in the first match, I was feeling pretty confident.”

Although Bolen spoke rather casually about “taking… shots on the ground”, your roving reporter would like to mention that Brad was trashing his opponent with his newaza. When one watches Brad, his matwork is several cuts above what most judo players and fans would consider “good”. His intensity is remarkably different than most players’ newaza, in that he attacks constantly and very aggressively with a wide range of skills and ties up most of his opponents, ending with a choke or armlock. (Note to challengers: stay off the mat with this guy. Seriously.) 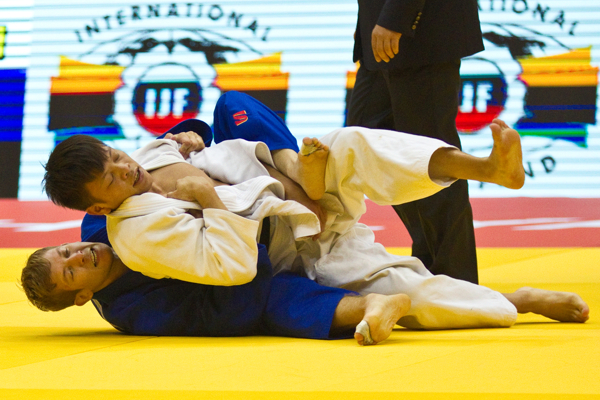 “My best game is newaza, that’s no secret at all. In most of my matches I win by ippon, and it’s usually with a choke, not nearly as much with a throw. And I’m only improving in that way. I’m picking up more submissions and other things that open up my choke, because it’s becoming pretty obvious that everyone I fight knows I have this in my arsenal, so I have to open it up with other things, which is what I’ve been doing. Yeah, newaza is definitely the strongest part of my game, which isn’t enough for me to make it big in the international scene, though.” 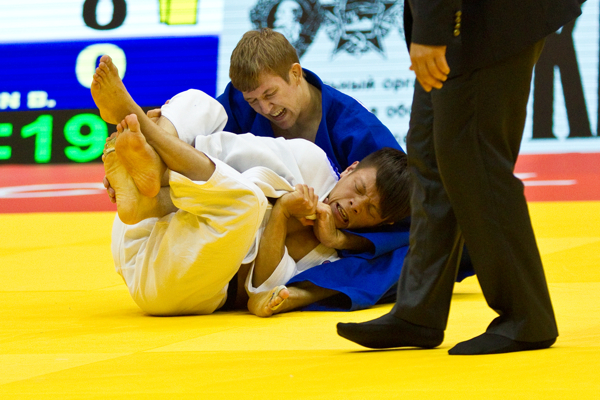 In the second round, Bolen was matched against Frenchman Loic Korval. “When I walked out, right as I bowed, the entire stadium went crazy because of the throw (on the mat) right behind me. And just for a moment I was thinking, ‘Wow. This is exactly where I want to be. This is amazing – this is the best feeling in the world and I haven’t even done anything yet.’ But then I needed to stop thinking how awesome this was, and reengage and beat this guy up, but it had the opposite effect.

“As soon as I put two hands on (Lim in the first round), I thought, ‘Oh, I’ve got this’, but when I put two hands on Korval he stiffened up all of a sudden and I thought, ‘Oh, wow, this guy’s really strong, and I wasn’t quite sure how I was going to figure out how to get an opening to attack, and in the midst of thinking that, I was already being thrown with a drop seoinage (for a waza-ari [half-point]) that was tight, twisting, and that I just wasn’t ready for. And he basically hit me with that twice in a row and that was the match.

“It was the same move two times. Both times he just kept me out, really stiff, and that caused me to stiffen up myself instead of adapting like I knew I should have, changing my grips and being more fluid with my arms. But I stayed stiff because he stayed stiff, and that allowed him to drop under me twice and throw me for waza-ari two times.

“He’s got really long arms, and he’s tall for the weight so he’s really awkward to deal with. He’s able to use his length to his advantage really well. Keeping you out makes you want to try to pull in, and when you push to pull in, that’s right when he drops. It’s very frustrating to deal with him, and it’s hard to avoid. And he’s strong on top of that.

“He twists in so tightly and does that ‘gator roll”, just twisting and staying tight, and it’s so hard to avoid once your arm’s trapped under his body. He keeps the momentum going with the roll.”

After the match was over, Brad realized that “From watching all the players, for the intensity of my training, I need to increase my capabilities of maintaining an intense engagement, because I find myself thinking that I can’t go ‘all in” on every exchange. But I need to get to the point in my training where every time I put my hands on the guy I’m advancing my hands and I’m able to keep doing that for a full five minutes and even more if I’m ever going to make it bigger than what I’m doing now.” 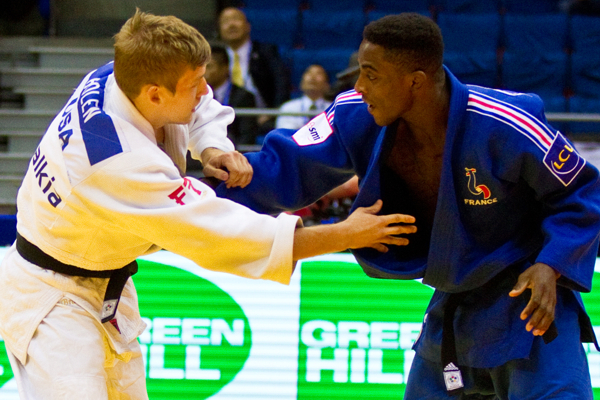 When asked about the pattern of getting a grip more aggressively, he said, “If you can’t get your hands where you want them, you’re not going to be able to make anything happen. The more highly ranked players are just so good at keeping their arms moving the entire time and each one is so strong that if they get their hands right where they want them, they’re going to be able to go as soon as they get the shot. When (Masashi) Ebinuma (winner of the division) gets his hands where he wants them, he’s already coming in, and at times even before he gets that hand he’s already sinking in for his attack. That’s what you have to get to be on that level.”

Brad went on to talk about the utility of international training, and he’s already thinking about the next tournaments. “I’m leaving at 4 AM tomorrow to go back home (to New York where he trains under Jason Morris), and then it’s either going to be Uzbekistan/Kazakhstan (in early October) or if not that, Abu Dhabi for sure (in late October).”

With his self-analysis and realistically defining his weaknesses and needs, Bradford Bolen is bound to improve. This might be to the dismay of his U.S. competitors, but it will be essential for his continued rise in the international ranks.