To rise to the top level in the world and become an Olympic referee requires every bit of the dedication needed to become an Olympic athlete, perhaps more, because as a referee there is no possibility of victory. The financial commitment is equally great: Candidates must travel the world, largely self-funded, to gain the experience and exposure to be considered for an Olympic spot. 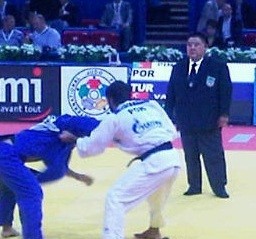 This year, USJF Executive Director Robert Fukuda has reached this pinnacle and will serve as an Olympic referee. His own travel to London will be funded by IJF. Terri Fukuda and Mr. Fukuda’s mother will be going to London so they can enjoy watching him on the mat at the highest level of judo competition.

The purpose of the Robert Fukuda Family Olympic Fund is to recognize Robert Fukuda’s contribution to American Judo by helping defray the large unfunded travel expense he is facing. Our goal is to raise $3000 and present Mr. Fukuda with a check and certificate of appreciation listing donors at the 2012 Junior Nationals in Spokane.

Please consider donating to the fund in any amount or you can help by becoming a sustaining member of MJDA. Please distribute this information throughout your Yudanshakai and encourage clubs and members to support Mr. Fukuda.

Michigan Judo Development Association is 501(c)(3) non-profit founded in 1988 by Mr. Noboru Saito for the purposes of supporting judo development throughout the United States. Major annual programs include administration of the Elizabeth Spaeth Women’s Judo Grant and financial support of judo students attending the annual SANIX International Middle School Judo Tournament and Training Camp in Fukuoka Japan. Since its inception MJDA has provided financial support to numerous athletes, coaches, and referees to defray travel and training expenses associated with development of their judo skill. MJDA was an early (and continuing) funding source for Kayla Harrison and has recently funded another upcoming female judoka, Bianca Lockette, gold medalist at the 2012 Senior Nationals. MJDA’s budget is comprised entirely of donations from friends of judo such as you.