Earlier in the afternoon we started playing "British Bulldogs" one of the many games designed to enhance the Ne-Waza teachings later.

Kids (later on, adults in the evening clinic) race across the dojo on hands and knees, trying to avoid getting turned over by the Bulldogs and becoming one. Ronda led the way showing the kids how it is done, and one by one the Bulldogs multiply until there were no kids left. Another game we played was "Monkey on a Tree." These two games and others leads into skills related to Ne-Waza and Tachi-Waza the next day.

That evening the intermediates and adults seem to enjoy the "British Bull Dog" even more. As great as Ronda is, she struggled to tackle the "Big" Yoshi by herself; teamwork finally gets the job done. For the sixty or more who attended the Ne-Waza clinic, Ronda treated them to some spectacular Ne-Waza techniques. One of Ronda’s Ne-Waza sequence where she demonstrated a Ne-Waza entry into multiple Osaekomi to Shime-Waza to Kansetsu-Waza drew oohs and ahhhs from the class.

Though some of the techniques are familiar, Ronda’s ability to break down and demonstrate the key points were crucial in making the class understand and make each technique successful. It was no different with the Tachi-Waza clinics on the second day. Ronda lead the class with games and exercises into serious techniques later, ending all her sessions with Randori. For those of us lucky enough to mix it up with Ronda, tapping out and air time was the norm.

This clinic conducted by Ronda Rousey was a success. 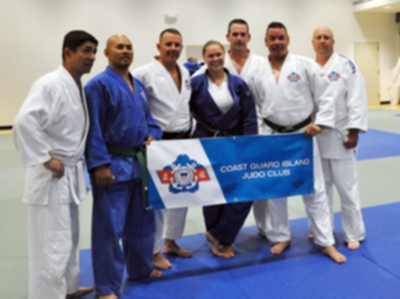 Over a hundred and twenty Judokas went away with knowledge in both techniques and appreciation of what makes Ronda a Champion.

Article and photos by Vinh Chung