The USJF Jeremy Glick Memorial Spirit of Judo Award Committee is very proud
to select you as the fourth recipient of this award.

The award is named in honor of Jeremy Glick who tragically gave his life
in the plane crash on 9/11. Many people were in awe of Jeremy Glick’s
calm composure and chivalrous demeanor before his final moments of life. Especially
impressive was his last conversation with his wife and how considerate of
her he was.

Attached is the letter of nomination from last year’s recipient,
Mr. Robert Brink.

You have suggested that a nomination of Jim Onchi, sensei for the Jeremy Glick
Award might be in order. I am most proud & privileged to submit the name
of my long time friend & sempai, Onchi Sensei for this very prestigious
honor. A few brief comments & some of many highlights regarding his very
long & honorable life dedicated to judo follows.

He started judo studies at age 9 (1927) & at age 18 was recognized by the
Kodokan with shodan rank. In less than a year later after winning the Oregon
State Championship, the Kodokan again promoted Sensei, this time to nidan
(see photo of to be mailed separately in case it might be published in our
magazine).

From his studies of kendo over many years he was also recognized as a young
man with the rank of nidan in Kendo.

Sensei’s contributions to the furtherance of Kodokan judo cover a large span
of years perhaps beginning with his instruction of judo & self defense
during WWII to US military officers in classes held at Ft. Warren , Wyoming.

In the early ’50’s Sensei introduced Kodokan judo to Portland as a consequence
of the reestablishment of Obukan Judo Dojo, Inc. (Obukan Dojo was founded
in 1926 under its original name, "Portland Judo Club", & renamed
in 1932 by Jigoro Kano, Shihan during a visit to Portland that year).

Sensei was instrumental in the growth & development of Kodokan judo through
the vast Northwest region including Oregon, Washington, Montana & Alaska.
He served in many leadership roles over a period which extends even prior
to 1954 when USJF was officially organized in its present corporate form as
America’s first national judo organization. He was recognized as one of the
yudanshakai’s first three national referees & has mentored countless others
from through out the yudanshakai to develop into certified mat officials as
well as coaches & assistant senseis. There are many third & some fourth
generation judo families that can point back to Sensei & credit his with
their introduction to Kodokan & USJF judo.

For many years he served as the chairman of the Northwest Board of Examiners
& later was selected to lead the yudanshakai as its president. At the
time of his retirement as president (not from judo!) he had been the longest
serving yudanshakai president in the USJF.

He is presently recognized by both USJF & the Kodokan with the high rank
of hachidan.

Sensei Onchi’s numerous accomplishments & contributions led to his selection
for induction into USA Judo Hall of Fame around 1990 (Obob can verify the
exact date from USJF records).

In 2002 Sensei was once again honored, this time by his selection to receive
the most prestigious Emperor’s Award from the government of Japan.

Onchi sensei in a true living legend. In his service to this country, to Kodokan
Judo, to the USJF & to the world of judo, he has demonstrated a life long
commitment which unmistakably personifies the best attributes of selfless
dedication & caring for others in the true spirit of the Jeremy Glick
Award.

I am honored to submit the name, Professor James Sadaki Onchi, for consideration
as nominee for the Jeremy Glick Award. 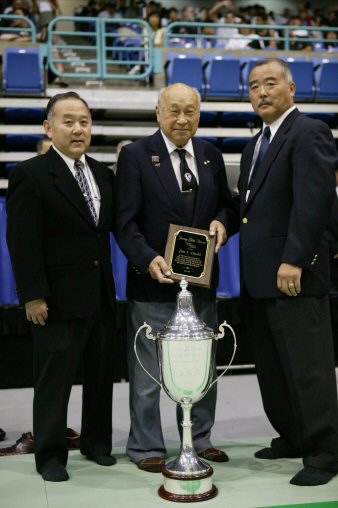