The 2005 Keiko Fukuda Judo Scholarship was awarded this spring to Frances
Glaze of Toledo Maumee Judo Club in Maumee, Ohio and Peggy Whilden of the
Baltimore Judo Club. The scholarship is awarded alternately to female Kata
competitors and Shiai competitors. Peggy Whilden, who has been doing judo
for about 35 years, had a steady streak of Kata first place finishes at Senior
Nationals over the years, and also recently took gold in Katame-no-kata at
the World Masters in Japan and in Ju-no-kata at the Pan American Judo Championships
in Venezuela (her second Pan American appearance). She has also been generous
in supporting the future of Kata competition by serving as a judge in various
tournaments, including the most recent World Masters in Canada.

Frances Glaze has also had a distinguished competitor’s record in Kata,
with extensive success in national and international competition, including
a gold medals at the Pan Americans in Argentina in Ju-no-kata, Nage-no-kata,
and Katame-no-kata. At the 2005 Nationals, competing with Ryan O’Connor
in the mixed division, she took first in Katame-no-kata, Ju-no-kata, and Goshin-Jitsu,
thereby winning best overall in the division. In the 2004 Fukuda International
Kata Tournament, she and Peggy Whilden competed as a team and tied for first
in Katame-no-kata. She also competed in 2004 Fukuda International competition
with Ryan O’Connor in Goshinjutsu, Katame-no-kata, and Ju-no-kata taking two
golds and one silver and winning overall mixed competition. Glaze has been
active in the promotion of women’s judo, and currently serves as assistant
director for the annual Joshi Judo Camp founded by Sensei Fukuda.

Each scholarship winner received $500 to help support her judo training. Whilden
used the scholarship funds to cover costs for participating in this year’s
Senior Nationals and in this summer’s annual Joshi Judo Camp. Glaze
will use the money to study at the Kodokan later this summer.

The 2006 Keiko Fukuda Scholarship will go to a Shiai competitor. Forms and
information are available on the USJF web site. The deadline for submitting
applications is March 1, 2006. 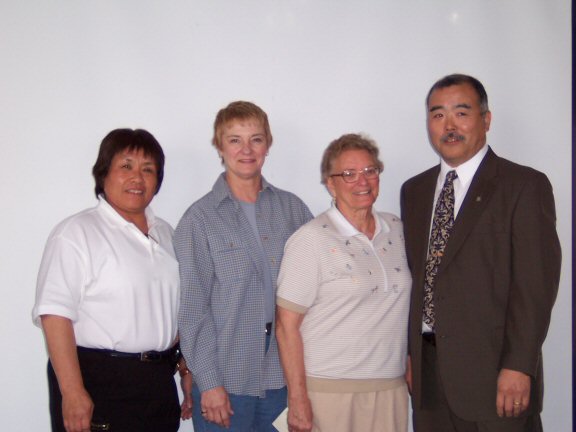 More Information on the Fukuda scholarship can be found here.